by Vilhelm Moberg, Sweden.
One of Sweden’s greatest writers, Moberg created Karl Oskar and Kristina Nilsson to portray the joys and tragedies of daily life for early Swedish pioneers in America. Their story is chronicled in this series of four novels, starting with their journey from Småland, Sweden to America in 1850, and following them as they struggle to make a new home in the Minnesota Territory.

Vol.1 The Emigrants: Karl Oskar and Kristina Nilsson, their three young children and other Swedes flee the poverty, religious persecution, and social oppression of Småland, Sweden. For ten long weeks they suffer the cramped, filthy quarters of the sailing vessel that finally brings them to New York City.
Paperback, 366pp. 1949

Vol.2 Unto a Good Land: In the summer of 1850 their journey to a new home in Minnesota Territory takes them by riverboat, steam wagon, Great Lakes steamship, and ox cart to Chisago County. There Karl Oskar and Kristina claim 160 acres and begin farming.
Paperback, 372pp. 1952

Vol.3 The Settlers: Karl Oskar and Kristina Nilsson struggle to prosper on their new farm in Minnesota during the 1850's. Kristina draws strength from a new-found spirituality. Karl Oskar cultivates and harvests rye, wheat and corn. Together they survive blizzards, grasshopper plagues, wildcat speculations in currency, and self-righteous neighbors.
Paperback, 399pp.1956

Vol.4 Last Letter Home: Karl Oskar and Kristina Nillson prosper in the midst of Minnesota's growing Swedish community of the mid-to-late-nineteenth century. Years of toil have brought them a comfortable house and a thriving farm. Now Minnesota struggles through two bloody conflicts - the Civil War and the Dakota War.
Paperback, 230pp. 1959

SKU
B123
Skip to the end of the images gallery 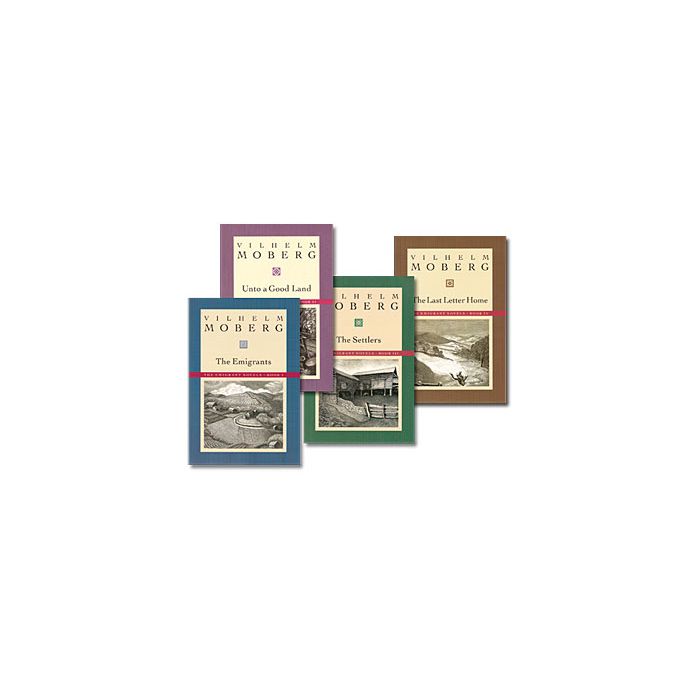