Since most of us are spending a lot more time at home lately, and because last year’s contest was so much fun, Ingbretsen’s Nordic Marketplace and Norwegian American present...

We invited you to write a haiku on one or all of our 5 topics related to Nordic-American culture. The contest ran from May 22 to June 19, 2020. The winners have been announced!
You were allowed one entry per topic, listed below:

The Prizes:
Besides bragging rights, first place winners in each category received a $50 gift certificate to Ingebretsen’s, good for use in the gift store or mail order. The winners were also published in the July Norwegian American.

All haiku will be published in a downloadable e-booklet, celebrating the literary talents of our remarkable customers. Click to view/download complete pdf

Under my pillow
Seven flowers picked at night
Midsommer dreaming

Rebecca, you took me into the romance of Midsummer's Eve, from picking wildflowers on a meadow to a trance-like sleep: dreamy!

Midsummer night fire
Rings out the dance in us all
Bewitching our souls.

Lana captures the mediaeval magic of Sankt Hans - I want to dance my way into summer!

Dance around and sing
A silly little frog song
Celebrate the sun.

Hannah nailed the fun of Midsummer. When else do the young and young-at-heart hop a around a Maypole like little froggies and piglets?

The senses open.
What is that heavenly scent?
Fresh lefse is served.

For crying out loud”.
Ole yelled before car crash.
A true Saab story.

Lena said dat is a true story. Ole said dere vas an accident, and dere vas a little dent in da fender. She asked him where da fender vas, and he said, “In da trunk.”

Ole tinks it might be about dat time. Lena’s da only investment he’s made dat’s doubled in size!

The extroverted
Norwegian stared at my shoes.
I stared at them too

I have been both the 'Storyteller' in this haiku, as well as the 'Extroverted Norwegian.' The literary twist at the end refocused the narrative back on themselves and showed, in a comedic way, the depth of thought that Nordics have between themselves and their interaction—or lack thereof—with others. This haiku brought me back to my very first experiences of breaking into social groups in Finland, and showed me how much of a Nordic-American experience this can be, as well.

Beautiful. I am reminded of a scene from a Nikolai Astrup painting. Highlights the importance of nature and self-reflection—an integral part of Nordic culture and especially important now, for everyone, during the global COVID-19 pandemic. I was also interested in the use of the word 'cloudberries' in the haiku, as it acts as the Kigo—a seasonal word or phrase used in more traditional forms of Japanese haiku—depicting nature and a season.

The ending had me laughing with this haiku. It wouldn’t be Nordic without a good Sven and Ole joke! Enjoyed the good use literary play with 'Nord-English'

Painting emotions,
Our deepest anxieties,
He touches us all.

Munch would be amazed
So much interest in him,
even Haiku poems

Entries in the Munch category of the 2020 contest came from far and wide: Honolulu, Oslo, the Upper East Side of New York, California, Midwestern states, Texas, Georgia....

It's difficult to draw humor from Munch’s introspective and anxious themes. Many entrants sensitively picked up on his personal problems, even seeming to relate his anxieties to current fears generated by the social and public health issues of today. Their ability to convey such ideas within the limitations of a few carefully chosen words (17 syllables) was noteworthy. No one referred to the contrasting bright and beautiful “Solen” (“The Sun”); that was a little surprising, yet it has not had the popular attention that the Scream has brought to Munch’s work. One of the interesting Haiku themes includes the mixed media approach that Munch employed, and this is a novel feature to mention. 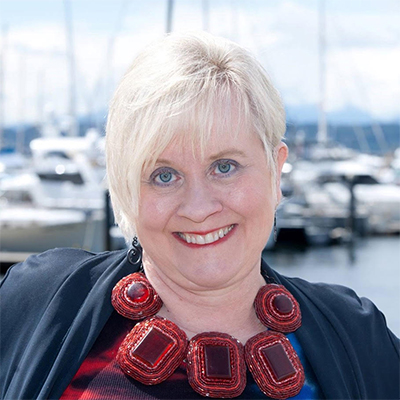 Midsommer Judge Lori Ann Reinhall, editor-in-chief of The Nowegian American, is a multilingual journalist and cultural ambassador based in Seattle. She is the president of the Seattle-Bergen Sister City Association, and she serves on the boards of several Nordic organizations. While she has never penned a HaikUff-Da, she holds three degrees in literature. She loves poetry and song, so don’t be surprised if you hear her singing these Midsummer lyrical masterpieces! 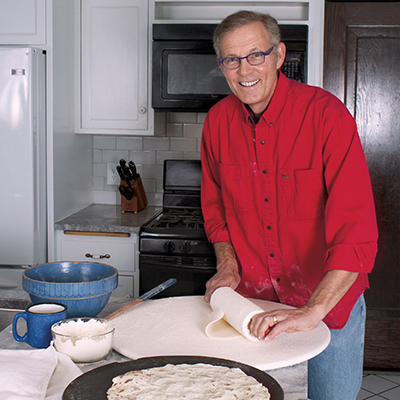 At long last, I can honestly say I have arrived! The honor of being asked to judge the Haikuff-Da Poetry Contest is … well, it’s the culmination of a career of writing four non-fiction books on lefse and lutefisk as well as my most recent book, a lefse novel called Final Rounds. How can I explain just what this honor means to me to judge the Christmas Traditions and Food Category, the highest of all categories, indeed? I have judged lefse contests at the top of the lefse world at the Norsk Hostfest in Minot, ND, and Potato Days in Barnesville, MN. I have sung my lefse song “Keep On Rollin’” on stage at the Norsk Hostfest and at scores of speaking engagements. I have had the privilege of teaching hundreds of people to make lefse in my classes. But these career triumphs are merely prologue to judging the Haikuff-Da Poetry Contest. Yes, tears are choking my words, so I lean on the lyrics of Cole Porter when I say it’s the top, it’s …

The Tow’r of Pisa
The smile on Mona Lisa
The most—it’s the max! 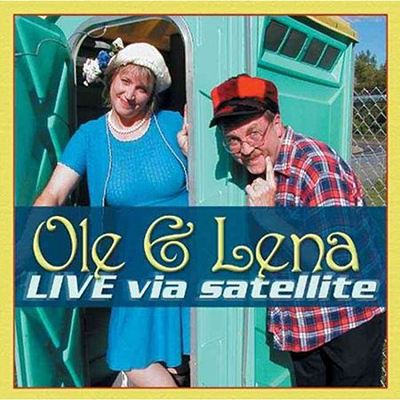 On May 12, 2019, Ann Berg and Bruce Danielson will have “Ole and Lena” for 30 years. That's the date of the first Faculty Variety Show in the Cambridge-Isanti School District. The show continued for 20 years and has given out more than $150,000 in scholarships to students going into education. Playing these characters have taken them to places like Minot, North Dakota for Hostfest where they appeared for two years. It also took them to Libby, Montana where they performed and were Grand Marshalls of the big Scandinavian festival there. These characters have also given them the opportunity to publish three books and a CD. Ann and Bruce, both retired, were teachers in the Cambridge-Isanti schools. Ann taught Science at the middle school and Bruce taught math and speech at the high school. Ann and her husband, Larry, love to travel, spend time at their cabin in Wisconsin, and sail. Bruce and his wife, Judy, love to spend time with their two dogs, Toby and Murphy, and Bruce enjoys his hobbies of making stained glass and playing guitar, which he took up at the age of 60. Both thoroughly enjoyed this Haiku project and were so excited to be invited to do this. 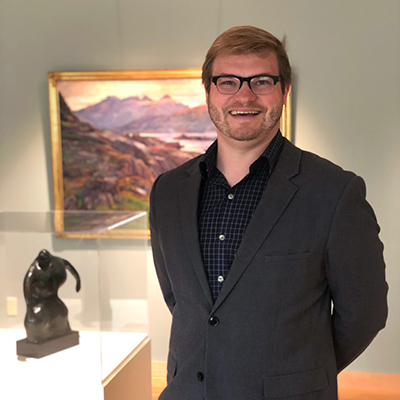 Max Stevenson is the Director of Exhibitions and Programming at Norway House in Minneapolis where he manages and installs exhibits highlighting aspects of Norwegian and Nordic-American culture.

Rooted in his interest from a young age in both his Finnish and Norwegian ancestry, Max grew up exposed to many aspects of his heritage before exploring Finland as an exchange student. Also, as a Finn, he was thrilled to judge the category of "Nordics and Social Distancing." As a verteran sauna enthusiast who has enjoyed spending many hours alone in solitude, in nature, deep in thought—he thought he might make a pretty 'ok' judge. 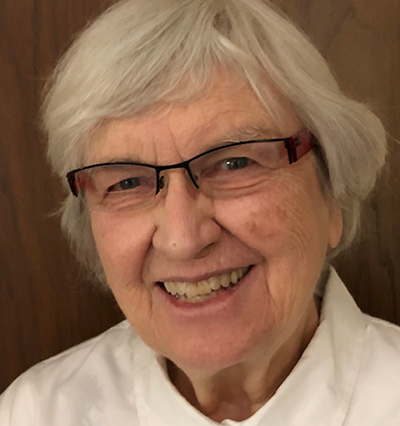 Mary Jo Thorsheim, Ph.D. is a recognized authority on the art of Scandinavia, especially Norway's fine artists. Edvard Munch has been the frequent subject of numerous programs that she has presented about his life and his art. Along with formal speaking and writing, she likes to participate in fun activities around art. Serving as a judge for this contest is another such opportunity, she feels. "Bring on the entries for the Edvard Munch category", says Mary Jo.

Mary Jo's heritage is 100% Norwegian: Rogaland is 75% and Hordaland 25%. Her grandparents Thorsheim emigrated from Bomlo and Sauda. On her Mom's side, the places of origin were Talgje and Vikedal. She maintains close contact with relatives in Norway and counts it as one of the richest experiences in her life.

Mary Jo founded the Norway Art ® business in 1979. Her aim was to import art from Norway as a way to focus attention on one important aspect of Norwegian culture. You can visit the current exhibit at Norway House through a virtual tour or learn more about Norway Art at www.norwayartonline.com.

Says Mary Jo, “And now the fun of this contest! Thanks, Ingebretsen's and The NORWEGIAN American newspaper!!